NADPH, an abbreviation of Nicotinamide adenine dinucleotide phosphate. It is also called TNP or Triphosphopyridine nucleotide. In its reduced form it is called NADPH. While its oxidized form is NADP+.

It is produced in plants during photosynthesis. While in animals it is generated during HMP Shunt, which is also called pentose phosphate pathway.

It is involved in various Redox (reduction-oxidation) reactions and perform various functions in human beings which are the following:

There are a few function of NADPH  which you being a medical student must know. Because lack of NADPH can alter the products that are formed due to it and can cause some serious disorders. 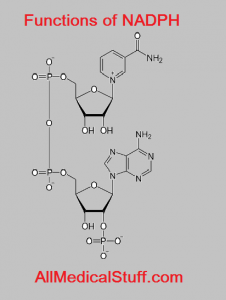 1. Synthesis Of Fats and Steroids:

HMP shunt which is the main source of NADPH in humans are the most active in liver, adipose tissues and other tissues of lipogenesis. The reason is that NADPH is required for the reductive synthesis of fatty acids and steroids. So, it is one of the major function of nicotinamide adinine dinucleotide phosphate and lack of it would decrease the synthesis of fatty acids as well.

Not only fats but NADPH is also required for the synthesis of few aminoacids as well.

3. Preserve the Integrity of RBC membrane:

Hydroxylation reactions that occur in microsomal cytochrome p450 systems aid in the detoxification of drugs. And NADPH has a role in these reactions.

Engulfment of foriegn substances such as microorganisms etc (called phagocytosis) which is carried out by white blood cells need the supply of NADPH.

As you can see there are many functions of NADPH in human body. All of these could be disturbed if there is a problem in HMP shunt. As NADPH is produced mainly via HMP shunt. Genetic abnormality of any enzyme of this pathway can cause disorders of all the above mentioned functions plus many others as well.