Hemoglobin is an oxygen carrying pigment, which is present in red blood cells.It has two parts. One is called heme which is a prosthetic group. And the other is goblin protein.

Heme containing proteins are present in aerobic animals. And concerned with the transport of oxygen. Heme part is same in all the animals. The difference is in the globin chains, that have different aminoacids in different animals.

Here in this post you will learn about structure of hemoglobin i.e its amino acids chains and heme part as well as different functions of hemoglobin.

Heme has one central iron, which is attached to four pyrol rings. The iron is in the forum of ferric ion. The pyrol  rings are connected by methylene bridges.

Globin is the protein part and consist of four chains. In human, there are two alpa chains and other two may be beta,delta,gamma or epsilon depending on the type of hemoglobin. 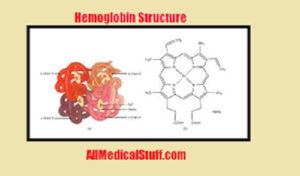 There are many functions of hemoglobin. Here i am going to list the most important ones: 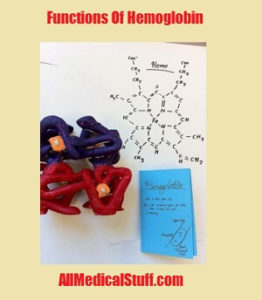 The main function of hemoglobin is to carry oxygen from the lungs to all the tissues of the body. This is due to the affinity of hemoglobin for oxygen. When hemoglobin comes in contact with oxygen, it combines with it and form oxy-hemoglobin. This is a week bond. When blood reaches to tissues, where oxygen is deficient, the bond is broken and oxygen diffuses out to tissues.

Some of carbon dioxide is transported from tissues to lungs through hemoglobin. Although the majority of it is transported via plasma but still it carries some of CO2 to lungs.

Hemoglobin also acts as a buffer.Buffer means to resist change in pH.Blood has 7.4 pH and it remains in the narrow range.Because, if it changes the life of the person may be endangered.Therefore, hemoglobin plays very important role in keeping the pH of blood constant.

Hemoglobin plays an important role in the modulation of erythrocyte metabolism.

Not only for oxygen, but hemoglobin act a very important role the transport of various drugs to their site of action.

Hemoglobin is a source of various physiological active catabolites.