As it is clear from the name reticular formation which means “net”.

It is a collection of neurons and ascending and descending fibers. It extends through the central nervous system and has many sensory afferent fibers that bring sensations and afferent fibers from higher centers to lower centers.

Although its boundries are not clear and it is present mainly in the brainstem. Its nuclei can divided into three column that are:

Its nuclei has long dendrites via which it get efferent connections of many ascending and descending pathways. There it not only plays a role in consciousness but also visceral and somatic sensations, muscle control, endocrine control and autonomic control etc which is discussed in much detail later. 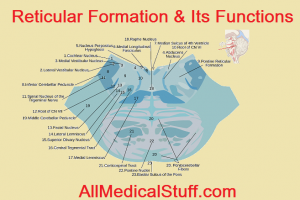 As mentioned earlier the nuclei of reticular formation are placed in brain stem and can be divided in to median, medial and lateral nuclei. These nuclei have long fibers that extend from spinal cord to medulla, pons, mid brain, hypothalamus, thalamus and cereberal cortex. Thus it forms some important connections for various activities that are discussed below.

It receives afferent connections from lower centers that is spinal cord via spinoreticular and spinothalamic tracts and medical lemniscus.

It also receive afferent fibers from the cranial nuclei of vestibular, acoustic, and visual pathways. And vai cerebelloreticular pathway from the cerebellum.

Then is also receives fibers from subthalamic, hypothalamic, and thalamic nuclei, corpus striatum and the limbic system.

And finally it receives afferent fibers from cerebral cortex i.e from primary motor cortex of the frontal lobe and from the somesthetic cortex of the parietal lobe.

It sends various efferent fibers to the motor cranial nuclei and anterior horn motor nuclei of spinal cord via reticulobulbar and reticulospinal tracts.

As mentioned in the start there are many function of reticular formation due to its different afferent and efferent connections. Some of its important functions are the following:

The reticular activating system plays a vital role in consciousness as it receives many fibers from sensory ascending tracts and channel these signals to cerebral cortex. Therefore it causes wakefulness. The more the activity of reticular formation, the more sensory signals would sent to cerebral cortex and the person would be awake.

It is activated by different sensations differently. Like the most potent sensations that activate the reticular formation and thus cause extreme consciousness of cerebral cortex is pain sensations.

2. Control of Somatic and Visceral sensations:

As mentioned above in the connections of reticular formation, it plays a very vital role in controlling somatic and visceral sensation via the gating mechanism either by facilitation of inhibition.

As motioned in the afferent and efferent fibers, reticular formation can alter the muscle tone by controlling the activity of apha and gamma motor neurons via the reticulospinal and reticulobulbar tracts.

It does so by facilitation and inhibition. Like it inhibits antagonist muscles vai reciprocal inhibition and thus facilitate muscle movements.

Due to its connections with hypothalamus, it has probably a role in biological clocks as well.

It receives coming fibers of autonomic system from higher centers like cerebral cortex and hypothalamus etc and then send efferent fibers via reticulobulbar and reticulospinal tracts to sympathetic and parasympathetic outflow.

As explained above in biological rhythms, reticular formation of connected via hypothalamus and thus it probably influence hypothalamus activity by facilitating or inhibiting the secretion of releasing hormones.

It is the reticular formation via which most of the pain pathways and nerves passes to the cerebral cortex where they are interpreted and processed.

But it is gives origin to the descending analgesic pathways whose function is to block some specific pain signals at the level of spinal cord.


So, this was all about of the structure and functions of spinal cord. Hope you would have gained some knowledge from it. It you wanna contribute to this use the comment section below.