Kidney is one of the most important organ of the body. Because it has many functions without which person cannot survive. Therefore, for a medical student, a complete anatomy i. e structure of kidney and physiology i.e functions of kidney are very important to learn. Here in this post, i am going to explain the complete renal anatomy and physiology in detail. 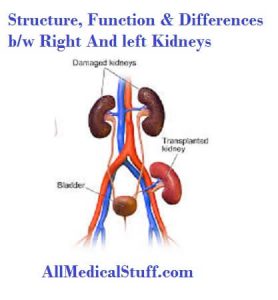 Kidneys are bean shape structure that lie on the posterior abdominal wall on the sides of vertebral column. They are two in number and helps in the formation of urine.

Kidneys are Retroperitoneal organs which means they lies behind or outside peritoneum. They lie just below the diaphragm on the posterior abdominal wall. The right kidney is slightly lower then the left kidney which is located at the level of 12th thoracic to 3rd lumber vertebrae. The reason for this lower right kidney is the large right lobe of the liver which displaces the right kidney and thus it is slightly lower then the left one.

As mentioned in the start, kidney is a been shaped organ. It has a concave surface (a renal hilum) an artery enters kidney which supplies it i.e renal artery and a renal vein and a ureter comes down. And convex surface on the opposite side.

Kidney is divided into outer cortex and inner medulla.

Difference Between Right And Left Kidney:

As most of the differences between right and left kidneys are explained above in the anatomy of kidneys. But still we would discuss them in great detail below:

Here are some of the main differences between left and right kidneys:

Purpose of the Kidneys:

The main function of the kidney is to excrete waste substances. But there are much more as well which are described below:

Kidneys are one of the main source for removal of extra/harmful metabolites from the body which is the main function of kidney. Almost all the waste products such as urea, which is the waste product of protein metabolism, creatinine (from muscle creatine), uric acid, bilirubin products, metabolites of various harmones and drugs etc are eliminated by kidneys through urine which a medium for the excretion of these substances.

2. Regulation of Water And Electrolytes Balances:

Controlled excretion of water and electrolytes is very important for homeostasis. Because slight changes in osmolraity can cause server problems like hyperkalamia can cause cardiac arrhythmia and even cardiac arrest.

Intake of water and these electrolytes depends on the needs and eating habits of person. But kidneys are responsible for the control of any increased or decreased amount. For example if a person takes too much sodium, various mechanisms in kidneys are activated that causes excretion of sodium and brings back normal plasma osmolarity.

Body pH is maintained not only by lungs and buffers but by kidneys as well. They do so by secreting more hydrogen ions or by conserving them.

But kidneys are the only organ that get body rid of certain acids produced during metabolism such as sulfuric acid and phosphoric acid.

Kidneys regulate arterial pressure by 2 machanisms. One is long term mechanism and another is short term mechanishm.

Short term Kidneys regulation of arterial pressure is by excreting variable amounts of water and sodium. Thus increasing or decreasing blood volume. While it helps in long term regulation by vasoactive substances such as renin which further helps to produce angiotensin 2.

One of the very important function of kidneys is the production of erythropoietin. Erythropoietin is a hormone that stimulates hematopoietic stem cells to produce erythrocytes i.e red blood cells. Severe anemia can results due to kidneys failure because of less production of RBC’s as stimulus for its production is not there.

Kidneys can produce almost the same amount of glucose as liver during server fasting by the process of gluconeogenesis.