Removing proteins from blood can be done via some techniques. The one method which is widely used is precipitation by large anions. Below you would find procedure of this method in detail. But first lets learn more about PFF.

Why proteins are removed from bood:

It is one of the most asked question that why we prepare protein free filtrate? The reason is that, proteins interfere with some blood tests and may alter the results. Therefore, it is necessary to remove proteins or make a PFF before performing these tests.

In Which tests we make PFF:

This is yet another question that in which tests we should removed all the proteins from blood. So, below is the list of all the major tests in which you must prepare a protein less filtrate:

Protein acts as an anion when its pH shifts towards alkalinity. Therefore they can be precipitated using heavy metals like Copper, Silver etc. Bio medically this principle is used in AgNO3 cautery and for metallic poisoning etc.

This method is the basis of folin wu method and other similar methods for PFF preparation.

As mentioned above, folin wu method is one of the most widely method used for the preparation of protein free filtrate. This method is done before doing laboratory estimation of creatinine, urine and uric acid in blood. This is method is based on precipitation of proteins in blood by large anions. 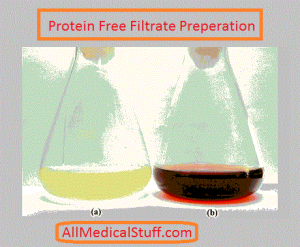 As mentioned above, all the proteins in the blood are precipitated by anions. The anions that are used in this test is tungstic acid.

Here are the apparatus that is used for this method:

There are a few reagents used for this. They are the chemicals that are mentioned in principle of this test and some other supporting chemicals. These are the following:

Procedure of folin wu method for protein free filtrate preparation is quite easy and much like other tests. There are are few steps in this test that are given below:

Here the dilution factor is 10.

Why we Add Sulfuric Acid?

The second reason for adding sulfuric acid is to rupture the RBC’s so that the color of solution changes from dark red to dark brown.

Here are some of the precautions of this test:

After you do all the steps correctly, you would get colorless protein free filtrate. You can then check if proteins are present in filtrate or not by doing a general test for proteins.

If you want to perform laboratory test for blood creatinine, urine or uric acid then you must use PFF instead of serum or blood. And to make PFF you should follow the above step by step guide.