There are two extreme protein deficiency malnutrition defects that exists in infants and pre school childs. These are one of the most common nutrition disorders in most of the under developed or developing countries. They are very common and both are due to nutrition deficiencies or malnutrition. These are called kwashiorkor and marasmus.

Although both of them are due to malnutrition in infants but still there exists a lot of differences between them. Here in this post, we would discuss the causes, symptoms and treatment etc of both kwashiorkor and marasmus. But we will also list some points that kwashiorkor different from marasmus.

This term was introduced for the first time by Cicely Williams for the people of Gold Coast who were suffering from a nutrition disease. And it means sickness of the deposed child i.e. a disease the child gets when the next baby is born.

This disorder is mainly due to server difference of proteins in diets and occurs in children of 1-5 years of age. Means that this disorders occurs those children of developing countries who’s diet mainly consists of carbs but lack proteins.

This lack of proteins cases servers disorders because proteins are the building blocks of body. And its lack in diet will stop the development and growth process.

Here are some of the main symptoms of kwashiorkor:

Edema is secondary due to decreased albumin. Because, as albumin is a protein which is mainly responsible for suction force for fluids from interstitium and capillaries so decrease in albumin causes adema.

Immunoglobulins that are made up of proteins are also decreased and therefore, immunological response of child is low to infections.

Due to diarrhea etc there is decreased vitamins which lead to anemia and other disorders.

Growth is stunned and muscles are weak.

As mentioned that it is due to protein deficiency , so curing the cause would relieve symptoms. Daily 3-4g per kg of proteins that have all the essential amino acids would be helpful in recovery from disease.

Marasmus means “To Waste”. And it is due to the deficiency of calories. It occurs in less than 1 year childrens. It is also stunned growth, muscle weakness, anemia etc. And can be treated by giving the required amount of calories.

Here are some differences between both of these nutrition disorders: 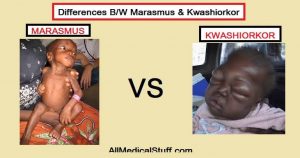 The first and foremost difference that can aid in diagnosis as well is that edema is seen in kwarhiorkor. While it is absent in case of marasmus.

Kwashiorkor occurs between the age to one and five. While marasmus occurs in children of less then a year.

Muscles undergo wasting in wasting in kwashiorkor while they are weak and have started atrophy in marasmus.

It is present in in kwashiorkor while absent in marasmus.

The main cause is protein deficiency in kwashiorkor. While it is total decrease in calories in marasmus.

It is 60-80 percent of normal in protein deficiency. While below 60 % normal in other.

Vitamin deficiencies is present in both of these disorders.

Abdomen is protruded in kwashiokor while shrunken in marasmus.

Growth is retarded severely in Erasmus while mildly in other.

There is dermatitis in kwashiorkor. While it is dry and atropic in marasmus.

It is decreased or normal in kwashiorkor while increased in marasmus.

It is decreased in both of the abnormalities.

So, these were the few major differences between marasmus and kwashiorkor. If you want to add some more points, use the comment form below. We would be more then happy if you contribute to the post.