Radiations doesn’t matter of what type, always seemed damaging for human body. Though they are a useful weapon in the treatment of cancer, yet, their side effects are enormous. Let’s tell you what radiations did to a Japanese man about 17 years ago.

A story of Hiroshi:

This man named Hiroshi Ouchi was working in a reprocessing facility. This facility is located in Tokaimura, Japan and this incident happened on 30th September 1999. Did you know what radiations did to poor man’s body? Well they ripped him apart. Even his DNA was shredded to nothing. Don’t know how but he still kept his breath but that was surely a miracle. After few days he condition got worsened. His flesh and skin started to fell. He lived a miraculous life of 83 days with the help of machines doctors were keeping him in this world. Only thing that doctors could think of was putting him in coma to deprive him of his pain. His body lost fluid weighing 20 kg in a single day. In a difficult conscious state he talked to doctors and explained all he could which resulted in amazing facts about radiations. They tried everything they could do but all in vain. There were special team of Doctors and nurses that were working on the case of Hiroshi but radiations made sure that they could do nothing. Here is the Picture of Hiroshi that is taken during his treatment: 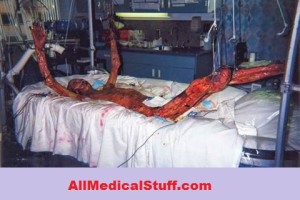 How did it happen?

You must be wondering about the chemical reaction that caused the radiations. Actually it was Uranyl nitrate solution that got deposited into about 16.6 kg of uranium and you know that how dangerous is uranium. This miss happening left a sign that is enough for us humans to stop playing with these dangerous foes. Here is some more insight on more of the effect that these radiations could cause to your different body parts.

If exposed to radiations you would lose hair quicken than ever and won’t be able to reproduce after sometime.

If the exposure exceeds 5000 rems, your brain cells would get damaged and you might know that brain cells never reproduce once destroyed. This may result in quick death and seizures because of the destruction of nerve cells and small blood vessels.

Sufficient amount of radioactive iodine can cause the destruction of if not full then at least a big part of thyroid.

What are we if there is no heart? Now if these radiations in range within 1000 to 5000 rems, would finish your small blood vessels and this may result in immediate death.

Radiations at very low ranges such as 200 rems can cause dangerous effects on reproductive tract. This is because of the rapid division of the tract cells.