Foramena of skull are opening in the skeleton of human skull through which various structures passes. These structures include arteries, veins, nerves, muscles etc.

As we are concerned with the foramena of skull, there are many foramen in skull but here we would mention some of the important one. We would also be list the sturctures that passes via them. In order to help you learn these foramena and their contents , we would be adding some mnemonics that would help you learn these skull foramens. 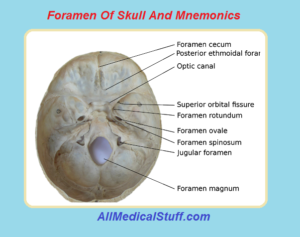 Foramen of Skull Mnemonic With Structures:

Now we will discuss all the above mentioned foramen of skull with the names of structures that pass through them. And also mnemonics for them.

The most important structure that passes via foramen magnum is medulla oblongata which continues as spinal cord after it passes through foramen magnum.

Mnemonics for foramen magnum is MAVer.

In this mnemonic, M is for medulla oblongata, A is for ascending spinal nerves and Ver is for vertebral artery.

Maxillary nerve which is the second branch of fifth cranial nerve, called trigeminal nerve passes through this foramen rotundum.

Five structures passes through this foramen. They are:

The mnemonics for foramen Ovale is MALE.

M is for Mandibular Nerve, A is for accessory meningeal nerve, L is for lesser petrosal nerve and E is for Emissary vein.

To learn the content of foramen spinosum, you just have to keep in mind MEN. In which M is for Middle menegial artery and vein. E is for emissary vein and N for nervous spinosum.

It is a triangular foramen in the base of skull via which passes:

To learn the content of this foramen, you have to keep in mind MEIG. Here is how you learn these structures from MEIG:

Via it passes facial nerve which is the 7th cranial nerve. It also contains stylomastoid branch of posterior auricular nerve.

It is the fissure that separates the floor of orbit from lateral wall and transmit few structures. The structures that it transmit are: ophthalmic vein and other infraorbital vessels, maxillary nerve (zygomatic branch) and the ascending branches of the pterygopalatine Ganglion.

It is also a grove in orbit of the eye and is located between the greater and lesser wings of spheniod bone. Though it passes:

The Greater palatine artery and nasopalatine nerve passes via this canal.

Via the two vessels passes that has the same name as this foramen i.e greater palatine artery and vein. And also anterior palatine nerve passes via it.

The only structure which passes via foramen cecum is emissary vein to superior saggital sinus which has clinical importance in transmission of infections from face to sinuses.

This foramen is located in the posterior part of temporal bone. It transmits two structures that are:

This foramen is located in the anterior surface of mandible and it transmits mental vessels and nerve.

Mandibular foramen is presents in the ramus of mandible and transmits Inferior alveolar artery, vein and nerve.

It transmits parietal emissary vein from the superior sagittal sinus.