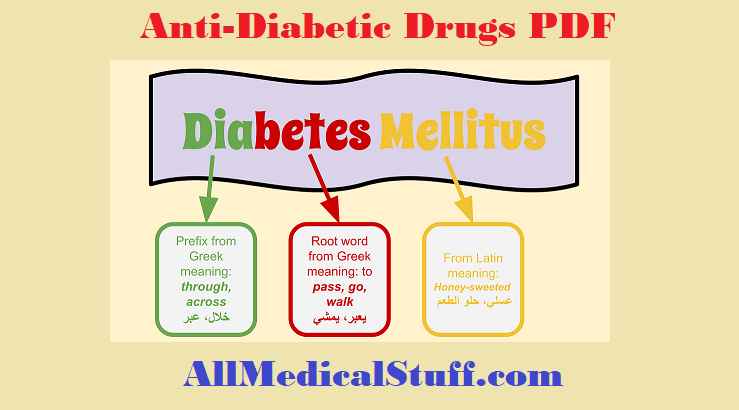 The word mellitus is a Greek word which means “honey like”. This name is given because in the urine of diabetes patient is found sugar. This is because of the high sugar level in blood of the patient which exceeds the threshold level in the nephron (mostly the first part) for re absorption.

As all of the sugar is not reabsorbed to the blood, it comes in the urine and thus the name diabetes mellitus. And this is one of the important finding of diabetes which is excessive urination. The same occurs (excess urination) in another disorder as well called diabetes insipidus but in that case sugar is not present in the urine.

There could be many causes of it, and i will not go into great detail as you can find that in the pdf file i am attaching at the end. But the basic reason of this disorder is either decreased release of Insulin or irresponsiveness to Insulin.

And due to these two main causes diabetes is then further classified into:

If you are a medical student and reading this post for anti diabetic drugs than you must know that in insulin dependent DM you must give Insulin to the patient. Which is given sub cutaneously and which is available in further different forms like rapidly active, intermediate active and large acting Insulin. Then there are combinations of these and different doses which i don’t want to discuss here (may be in a separate post) but before learning the anti diabetic drugs, you must learn the types and doses of Insulin.

Then for non insulin dependent DM patient you can only give oral antidiabetic drugs if it is controllable. In sever conditions we then add Insulin as well.

As i have mentioned above, these are several drugs that improves insulin tolerance and makes it available for the cells. Yet there are some others that helps in the release of Insulin from the pancreas.

Here i am going to list the name of anti diabetic drugs (may be in future i update this but this post is about the pdf so you can learn in detail from the pdf file). You can learn their names and for detail you can refer to the pdf file as well.

First of all it is dived to several groups. Each group then contain different drugs. The groups are:

You can read about the specific drugs in these groups in great detail in the pdf file below.