Abdominal pain can be broadly classified into three. These are abdominal somatic pain, abdominal visceral pain and abdominal referred pain. The meaning of these three are clear from their names but we would discuss them in great detail below.

The difference between these three are explained below: 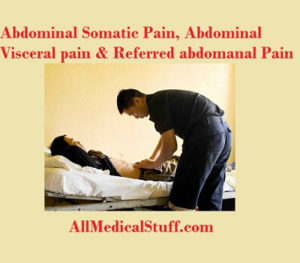 As the name suggests, this pain can arise from skin, fascia, muscles and parietal peritonium in the abdominal wall. This pain is localized and can be much severe. The pain can be lateralized when the origin is on one side of midline. Means if the origin of somatic abdominal pain is to single side of midline, the pain is lateralized means it is sensed to the larteral side of abdomin.

Impulses reach the central nervous system from the segments that are innervated the following spinal nerves:

As mentioned above that the abdominal wall is innervated by same nerves. That is lower thoraic and 1st lumber, cutaneous hypersensitivity and tenderness is observed in the person having inflammation of parietal peritoneum.

In the later stages of appendicitis, pain origination from parietal peritoneum is observed. This pain could be acute, sever and localized. And Muscular spasm/rigidity, and cutaneous hypersthesia (increased sensitivity) is observed in the right lower quadrant of the anterior abdominal wall.

Another example of somatic abdominal pain is chemical irritation to parietal peritoneum due to perforated peptic ulcer. It also produces the same symptoms as inflamed peritoneum in later stages of appendicitis i.e hypersentivitry of spin and increased tone of muscles. But pain is felt in upper and lower right quadrants as compared to right lower quadrants in appendicitis.

As the name suggests, this pain arises from visceral peritoneum, viscera and mesenteries. The cause of this pain could be ischemia of the viscus, distension of the hollow viscus, chemical damage to viscus and visceral peritoneum (due to gastric acid and juices) or stretching of viscus or mesentery.

As compared to somatic pain, visceral pain is dull and poorly localized. And it is referred to mid line.

As compared to somatic where muscle tenderness is observes, in visceral pain reflex sweating, salivation, nausea, vomiting and increased heart rate may be observed.

Colic is one form of visceral pain that could be due to intestinal obstruction, passage of gallstones in biliary ducts, or passage of stone in the ureter. And the pain is produced by violent contractions of smooth muscles due to any of the reason mentioned above.

As the name suggests, this type of pain is originated in one place and felt in another. The reason of the is that both of the places are supplied by the same nerves. That is the nerves that innervate the origin of pain also innervates other segment in which pain is felt. This is called referred pain. It can be both somatic as well as visceral.

The nerves fibers that innervates the diseases structure and the nerve fibers where pain is felt ascend along a common pathway. The cerebral cortex is not capable to distinguish between both and pain is also felt in other area which is normal. This is the mechanism of somatic referred pain.

Pain from stomach is referred to epigastrium. The reason is that the efferent pain fibers and along with sympathetic pass through the greater splanchnic nerves and celiac plexus. These senrogy fibers enter the spinal cord at the level of 5th to 9th thoracic. And as this region also supplies the lower chest and abdominal walls, pain is referred to these areas as well.