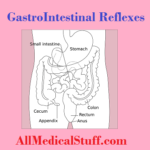 GastroIntestinal system of the human body has complex systems. One of the special of which is its own nervous system called Enteric Nervous system which composed of almost 500 millions of neurons which are almost equal to that present in spinal cord. Now via this entric nervous system GIT control … END_OF_DOCUMENT_TOKEN_TO_BE_REPLACED